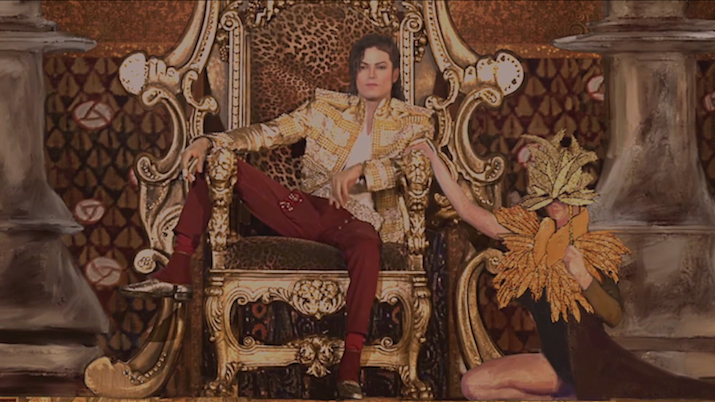 “Slave to the Rhythm” is a song by American recording artist Michael Jackson.

On May 18, 2014, a Pepper’s ghost (incorrectly referred to as a hologram) illusion of Michael Jackson performed “Slave to the Rhythm“, a track that was recorded in 1991 with L.A. Reid and Babyface during sessions for Jackson’s Dangerous album, for the 2014 Billboard Music Awards. The selection of the song “Slave to the Rhythm” for the performance was made in late 2013.

The Talauega brothers, Rich and Tone, were brought on right after New Year’s Day, and they started to draw up dance moves for Jackson and for the other dancers in the film. The brothers’ involvement with Jackson dates back to the 1995 MTV Video Music Awards; they also choreographed the HIStory World Tour in 1997. Jamie King was brought in to direct the video, which was produced by Pulse Evolution and Tricycle Logic.

A day after the coverage, the live performance of “Slave to the Rhythm” was uploaded to Michael Jackson’s VEVO YouTube Channel. Among Jackson’s fans, reception of the performance has been mixed; some fans believe that an impersonator was used.

The song is the 5th track of Jackson’s second posthumous album Xscape. Despite not being released as a single, the song appeared on several notable music charts due to digital downloads and streaming. Sony Mobile used a snippet of “Slave to the Rhythm” in their advertising campaign for the Xperia Z2 mobile phone.