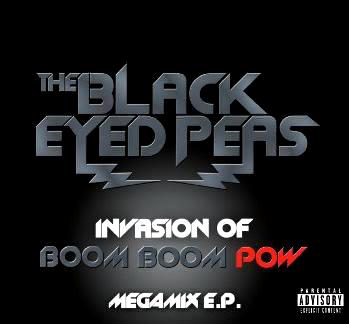 “Boom Boom Pow” is a hit song by the Black Eyed Peas released as the lead single from their upcoming album The E.N.D.. The song uses the auto-tune vocal effect, and blends the genres of dance pop, electro-hop and hip hop. The song is themed with a futuristic feel.

The single sold 465,000 downloads in its first week of digital release, the third-largest number of download sales in a single week overall, and the largest single-week and debut-download totals by a group in the history of digital-download sales tracking, reaching #1 on the U.S.Billboard Hot 100 and Pop 100. It became the group’s first U.S. #1.

Thanks to its digital downloads and massive radio airplay, the song has topped the U.S. Billboard Hot 100 for six consecutive weeks, making it the Black Eyed Peas’ most successful U.S. single to date. The song has also charted internationally and reached #1 in Canada as well.

Including remixes by Busta Rhymes, Fatman Scoop, Flo Rida and Party Rock (and many others not included here)