The HYPE FACTOR Music source for what\'s HOT before it\'s NOT!
Array 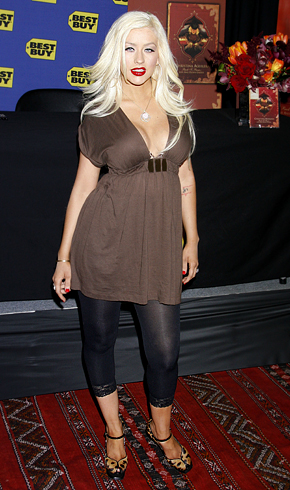 US Magazine reports “Christina Aguilera made her first public appearance since welcoming son Max at a Back to Basics DVD signing at a West Hollywood Best Buy Tuesday.

Before her appearance, she phoned in to Ryan Seacrest‘s KIIS-FM radio show, saying that her experience giving birth has left her “so inspired” to record another album.

“This whole incredible thing that’s taken place in my life, between the pregnancy and the birth….” she said.

“I’ve got so much in me to write about.

“This next record, I want to have a lot of fun with it. I’ve been brainstorming for the last nine months of my pregnancy.

“This next album will have a whole new me,” she added. “A different me.”

Aguilera described her forthcoming album as “short and sweet” and “completely different” from Back to Basics, although she did not elaborate on what the style of the album would be but described it as a “fun album.” In an interview with Blender magazine Aguilera stated that recording a song with her once rival Eminem is on her agenda. In a new interview with Ryan Seacrest, She revealed how her newborn son Max has inspired her to write her next album.

“Moves Like Jagger” is a single and music video...

"Moves Like Jagger" is a single by American band Maroon...

"You Lost Me" is a song performed by American...