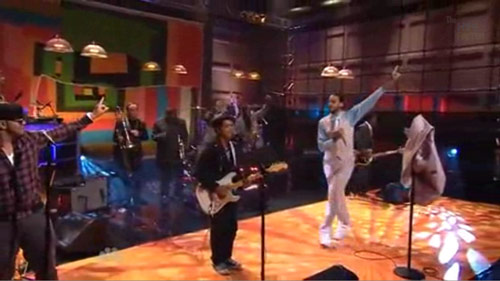 Travie McCoy performed his hit “Billionaire” alongside Bruno Mars on The Tonight Show with Jay Leno on Tuesday. I believe this is the first televised performance of the single, the first cut from McCoy’s debut solo album “Lazarus” in stores NOW.

The mentioned LP was released last week, June 8, so it’s quite shocking that Travie did not do any TV promo on that week, but has waited this long to do it!

No matter what the Smeezingtons-produced “Billionaire” is a certified smash hit, peaking #5 on the Billboard Hot 100. However, the same cannot be said for the album as it has debuted with only 15,877 copies sold. Disappointing? Yes. Expected? I’d say yes taking into account the lack of promotion.