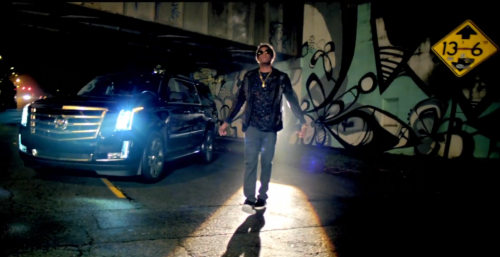 “Lil Bit” is the lead promotional music video and single from American rapper and vocalist (from Atlanta, Georgia) K Camp‘s upcoming debut studio album, Only Way Is Up.

The Banger of a Track premiered in early April 2015, and the music video premiered on K Camp‘s official YouTube VEVO channel.

Get a “Lil Bit” of a sample from K Camp’s upcoming album coming soon, until then enjoy this song and bump it wherever you go.

[Verse 1]
4 bad bitches, man the pleasure all mine
We ain’t doin’ nothing, tryin’ to have a good time
Roll around the city, Porsche seats on recline
4 bad bitches fuckin’ at the same time
Bitch named Keisha got an ass like a bubble
Feed her M&M’s, watch it turn to some trouble
Two hands on the ball, shorty just doubled
Once I get mine I ain’t trying to cuddle
All in the party hippy trippy off the henny
Jar full of weed, baby girl I got plenty
Break fast for the chick like I work at Denny’s
Shawty where the shots I need many, many, many
Molly in the system, drinkin’ out the bottle
Shorty goin’ in, going hard full throttle
Instagram likes got her feeling like a model
If you looking’ for the drugs, don’t worry I got em

[Bridge]
Shot number 4 got her still talking sober
Molly got her ass wide awake no Folgers
Aye what it is Diego bring the Doja
One more shot, I’m in that hole like a gofer
Smoke, smoke, smoke
Drink, drink, drink
Bitch I’m Getting money give a damn what you think
One more shot, hella bent, might faint
Super lit hit it ho
Going hard in the paint

[Verse 2]
Fruit rolling up he ain’t ran out of yet
Boutta take off, my migos offset
Rolled up the blunt, got a dutch full of Shrek
Said that she want more, guess she ain’t done yet
Green Green Green
Mean Mean Mean
Bad bitch kissin’
I ain’t tryin’ to intervene
If you gone do it baby do it for the team
And it’s on blowing strong
Money long, Limousine