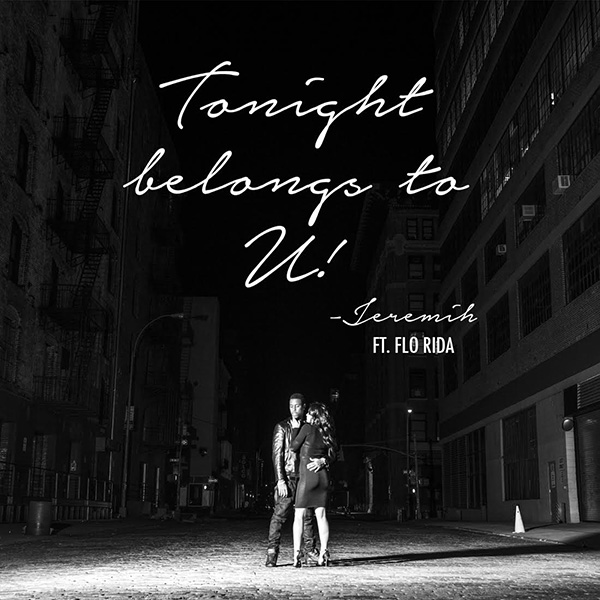 The song was produced by David Guetta and Mick Schultz. The sound is drastically different from Jeremih’s R&B roots – what do you think of this sound for Jeremih on a Guetta-eque track?

On June 4, 2015, Dutch music producer/DJ Afrojack released a remix of the track on YouTube.

Listen to: Jeremih feat. Flo Rida – ‘Tonight Belongs to U!’

Lyrics for Jeremih feat. Flo Rida – ‘Tonight Belongs to U!’

[Verse 1: Jeremih]
Wasn’t looking for it to heal the scar
But today I was riding on lonely boulevard
Wishing all wasn’t lost and then there, there you came
Honestly a star shooting through the scene
In the sky, that’s where we are, and I’m tryna catch a beam
See them other girls, yeah they try, but they ain’t fly like you

[Verse 2: Jeremih]
You’re all by yourself and I came to help
I was down, it wasn’t right, you came from outta left
You made a storm up in Ibiza, oh, oh what a dream
I close my eyes baby, now I don’t wanna go
I’mma star, cause if I’m dreaming I don’t wanna wake up
Gotta hear it from the [?] speak right with you

I know who you are, you’re a rider, girl on fire, ghetto superstar
And I can’t deny it, girl your body’s so damn beautiful
Let me see you turn around like ay, baby go on drop it to the ground like ay
Red lips, yellow bone green like ay, eyes popping baby ’til I beat the thing right
Oh now, feeling like y’all finally found out, what what what what, slow down
Pull the trigger too fast and I’ll bust my gun gun gun gun, no conversation
Don’t stop with all the shaking, them other girls really basic
You amazing, so glad I got you girl