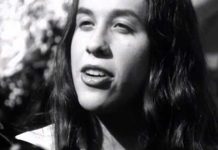 Alanis Morissette – “Hand In My Pocket”

“You Learn” is a song by Canadian singer-songwriter Alanis Morissette from her third studio album, Jagged Little Pill (1995).

“You Learn” was a huge success worldwide. The song was her third consecutive number one single in Canada off the album and peaked at number six on the Billboard Hot 100, charting high from strong airplay off the back of “Ironic”.