Their new album The Quilt will surely please fans or new comers to the band. The Quilt is not only worth the wait but it includes bangers for your subs, rap anthem hits, and the classic Gym Class Heroes everyone knows and loves.

The opening track featuring Estelle, “Guilty As Charged” is a pop driven track with great vocals on the hook from Estelle. Followed by another diva, Patty Crash is featured on the text message obsessed-fan track “Drnk Txt Rmeo” which is about Travis not being able to stop texting.. sound familiar to anyone? 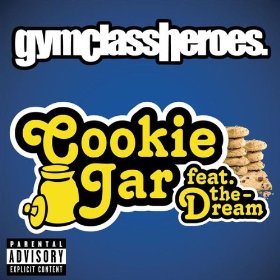 The Urban side of Gym Class Heroes shine on “Cookie Jar” and “Ear Kissin” both of which feature the urban-radio-god The-Dream. If you haven’t already heard Cookie Jar, it’s the second single from the album and it’s a great one at that. It’ll have you singin about Travis not keeping his hands out of the cookie jar.. that naughty Travis. Besides that, the one and only Radio Killa is featured which can only tell you it’s a hit!

Or, maybe my personal favorite track on the CD features Dre (of Cool & Dre) who has previously worked with Chris Brown has worked with Gym Class Heroes on “Don’t Tell Me It’s Over.” Don’t Tell Me It’s Over was previously scheduled to include Lil’ Wayne, but was dropped for the album version. It is good with or without Wayne and the track is a nice Piano/Rock/Pop song that will be a favorite of all.

You also can’t forgot the one and only Busta Rhymes that is featured on the first single “Peace Sign/Index Down“ which is about peace not hate, “Put up your peace sign, put your index down”.

Some other mentionable tracks, “Catch Me If You Can“, “Coming Clean” and “Blinded by the Sun” (featuring Patrick Stump of Fall Out Boy) are also some great tracks featured on the CD.

This is definitely a CD to check out if you’re interested in Rap/Urban/Rock or just if you’re an old time fan of GCH or if you’re new! Don’t forget to pick up your copy of The Quilt, out September 9, 2008!