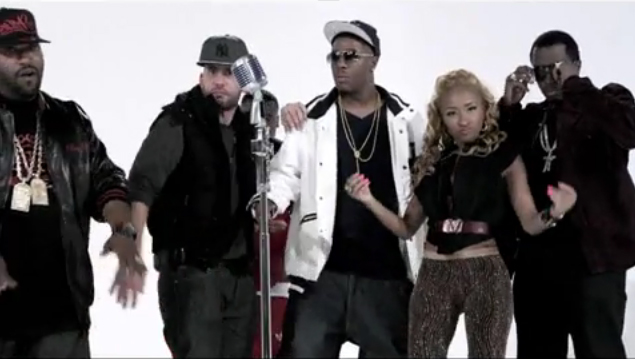 “Get Big” is one of the first official singles from American rapper Dorrough‘s second studio album (similarly titled), Get Big. The remix’s music video was directed by Rage. The album was released on September 7, 2010.

The official remix features rappers Diddy, Yo Gotti, Bun B, Diamond, Shawty Lo, Wiz Khalifa, Maino & DJ Drama. However, the music video does not include the feature nor the verse from Wiz Khalifa, apparently being absent the day of the video shoot.

The banger of a track was produced by Nitti. Dorrough released two official singles: “Hood Chick Fetish” featuring Yo Gotti and “Get Big“.

[Diddy]
This is the remix

[DJ Drama]
Hey Dorrough, you know you started something with this Get Big sh-t right
Got the whole world on it now huh?
Catch up suckas!

First thing first, I hit the scene solo
I rep the triple D, Dirk Nowitzki Tony Romo
I can’t be touched oh no (ohh)
I’m flashing like a photo (ohh)
My car painted like the AT&T logo (Yah)
Blue & white paint on a Mazaradi four door (haah)
My outer wear is Gucci but my underwear’s Polo (woo)
You say you gettin money but your baby momma say
You got a dollar in your pocket – say my n-gga yousa hobo!

Who the fuck talkin money? Ha ha ha – funny
I got so much money, my money – count money (cmon)
My nickname is Billy, I’m a mothaf-ckin star (star)
My penthouse so high that my address is Mars (oohwee)
Auto oil rig, now my bank account’s arabian
Yacht so big you could’ve swore I brought the navy in (let’s go)
This is my grown, at the top – I’m alone (and if)
You ain’t close to a billion, take your broke ass home

I spit dope boy knowledge, bird in my pocket
There’s too many hundreds, they can’t fit in a wallet
Too many rubberband up, (up) all white downed (down)
Three hundred twenties – (twenties) for the whole pound
Big block gators, (gators) fresh pair of Marcs (marcs)
5.99 – brand new New Ferrari .. Remix (remix) – yea think again
Million dollar n-gga money be my best friend

I got this city on my back
My diamonds on my front
Con Jule up in my cup
Grand daddy in my blunt (blunt)
Two thousand and whatever this year is after this is (this is)
Cadillac shoes, and jazzy yellow misses (misses)
Wanna blow me kisses (kisses), right around the zipper
Down to drop it to the floor and I don’t even gotta tip her
R.I.P to Jack Trippa (trippa)
With two up in the crib (crib)
They say they want my babies, then they’d better get it big
(Here they come)

(Diamond)
I came in as a rookie with my pockets on fat
Got a million dollar p-ssy wish my cat got stacks (UH)
Chea, n-now that’s the boss b-tch movement
You can go against the boss, but the boss never lose it
Got a house on the water (water), so I can fit the gators (gators)
r-Raspberry Porche (porche), 32 Flavas (flavas)
(my) My breast so swoll (yea) – I can’t fit it in my wallet (wallet)
And my pockets on big, ch-Christopher Wallace (That right..)

Do it shawty, let me say (say)
Shawty Lo do it, B.I.G.
I like a lotta hoes and a little freak (yeah)
But if I had to choose, M.O.E. (ay)
You ain’t got enough paper, (naw) middle finger to a hate-ter
You remember me, big ups
Purp in mine, what’s in your cup (HAAH)