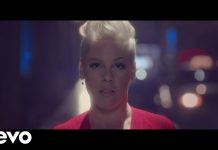 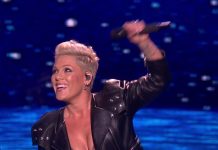 “So What” is a song written by American pop singer P!nk, Max Martin and Shellback and released as the first single from Pink’s forthcoming fifth studio album Funhouse.

Lyrics for P!nk – So What

The video begins in a tattoo parlour, Pink is getting a tattoo on her arm before the scene cuts to Pink riding down Sunset Boulevard on a lawnmower drinking alcohol. Pink is then shown in a music store browsing guitars. She pretends to play before attempting to smash it into the ground, but she is restrained by a store clerk which leads to them engaging in a fight. Pink is shown cutting down a tree engraved with her and her ex-husband’s names with a chainsaw. She cries on the chainsaw, while telling herself that she is alright, right before the tree falls and nearly crushes her neighbor. After this, Pink is sitting in a bar after losing her table to Jessica Simpson, accompanied by a man who is playing the drums out of glasses.

The next scene goes to Pink on a motorbike, while a newly wedded couple in a car pull up beside her, presumably her ex and his new wife. Outraged at the happy newlyweds, Pink is shown throwing objects at the car and popping the wedding balloons, before climbing onto it and playfully (albeit violently) attacking the vehicle. Pink is then shown stripping on the red carpet, surrounded by photographers, she takes off her jacket to reveal her nude body. The paparazzi all snap photos of her as she dances naked. Then while getting her hair done, her stylist applies hairspray, as Pink turns on her lighter, accidentally setting her hair on fire. Also shown are two men urinating in bottles, which they give to Pink, however Pink passes them to two guys walking past her. They drink it and then realizing what it is, spit it out in disgust. Finally, Pink is shown surrounded by men and women in their underwear engaging in a pillow fight. The video then cuts between all the scenes shown in the video before ending with Pink poking her tongue at the camera with her ex-husband.

Pink is also shown performing the song in concert near the end. Pink’s ex-husband Carey Hart makes cameos throughout the video, such as a scene where they are talking as newspaper headlines flash behind them. Producer Butch Walker also makes a cameo.

Sahara feat. Mario Winans – Mine (Baby Are You Mine) Music...