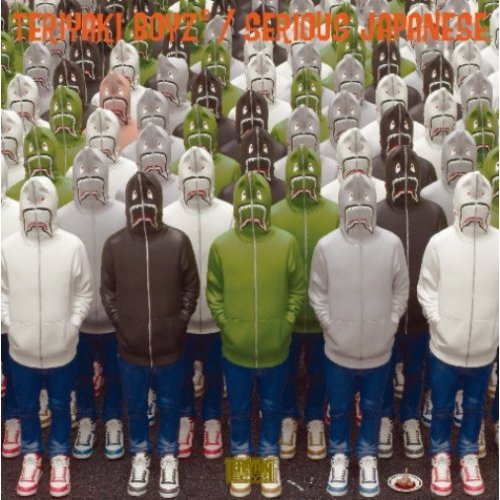 “Serious Japanese” is the second studio album released by Japanese hip-hop group Teriyaki Boyz, and first American release of a Japanese hip hop group by a major label. With productions by Kanye West, Pharrell, The Neptunes, and features by Busta Rhymes and Chris Brown, just to name a few – you know they’re going to be “very interesting songs” to say the least. Spawing hits like “Tokyo Drift (Fast & Furious)“, “Zock On!” and “Work That” – this is a CD that will not disappoint Hip-Hop fans around the world.

First off let me say that this CD is half English and half Japanese so reviewing it was a bit different, although I couldn’t review a lot of the lyrics the CD is full of great produced songs. So, if anything the Japanese hooks get stuck in your head (not that that’s a bad thing..) and on most songs there are English verses so you can enjoy them even if you can’t enjoy the CD to its fullest.

I might as well start by talking about the single we’ve all heard (well, maybe not – but that might be a good thing). If you were lucky enough to check out Fast & Furious: Tokyo Drift in 2006 you most likely remember the girl repeating “Tokyo Drift (Fast & Furious)” over and over, but you couldn’t get it out of your head. “Fast and Furiousss…” Like it or not, it was featured on the soundtrack – now on the album, even in the form of a Remix that features Pusha T & Fam-lay and drops annoyingness but keeps the very bad-ass The Neptunes produced track.

First official single “I Still Love H.E.R.” features and was produced by Kanye West. It is a bass-horns sampled track, and a great track overall. If you are familiar with Kanye’s work it sounds very much like his tracks “Graduation”-era. Also feeling outdated for it’s release now.

Another Kanye West produced track “Teriya-king” features Kanye West and Big Sean, is a banger of a track. Chanting “Whoaa..” over and over is slightly addicting and you can’t quite get enough of it! A hook that could easily be abused by repeating it (and ruining the song) is not so in this case. “Kings.. kings.. kings.. – We’re the Teriya-kings.. kings.. ”

Another The Neptunes‘ produced second single, and crazy-awesome-mess of a track “Zock On!” features Pharrell & Busta Rhymes. The track, much like many of Pharrell’s productions, is very “out there” and different sounding. The sound which is familiar, repetitive.. but different all at the same time comes out great in the end. Great deliverance in my opinion from Busta as well.

“Work That” is a the third single off the album, features Chris Brown & Pharrell and a personal favorite. A very basic hook that delivers well – “Let me see you Work That“. The video portrays exactly what they wanna see worked.. over and over and over. Either way, it’s a hit for the Teriyaki Boyz and the track that might possibly break them into the America Hip-Hop market once and for all.

“5th Element” is a very abstract song, produced and features Cornelius with minimal sounds and a nice bass this track is interesting all the way through and musically brings you a song how you have never heard before.

Jermaine Dupri produced track “Sweet Girl” features Dondria, and sounds like the typical R&B/Hip-Hop duet track you hear on the radio thanks to the help of the English hook and the little bit of Auto-tune.

Serious Japanese is a great second album in which the CD from beginning to end is ear candy. From annoyingly addictive “Tokyo Drift (Fast & Furious)” to the repetitive (but equally addictive) – Let me see you “Work That”. Their second work proves that if you have a strong track and great lyrical patterns their language is universal with their music. It brings together American Hip-Hop production with J-Hip-Hop and makes a masterpiece that puts to shame some American Hip-Hop!