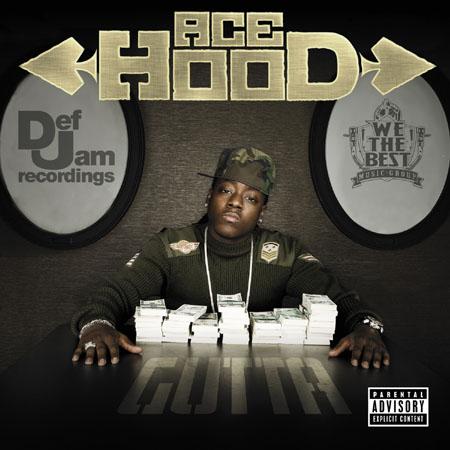 Gutta is the debut album of Ace Hood, released on We The Best Music and Def Jam collaborating with Slip-N-Slide on November 18th, 2008. Guest appearances include Trick Daddy, Plies, Akon, Rick Ross, T-Pain and more. Production comes from J.U.S.T.I.C.E. League, DJ Nasty, The Inkredibles, The Runners, Cool & Dre, Gold Ru$h, and more. “Cash Flow,” his debut single, was released in May 2008. “Ride,” featuring Trey Songz, was the follow-up single and was released in July. On August 26, the original release date for the album, a video for the song “Get ‘Em” was released on the internet.

The first single being “Cash Flow” features T-Pain & Rick & Ross, the track peaked at 55 on the U.S. Billboard Hot R&B/Hip-Hop Songs so although not terrible it has that T-Pain hook that sticks in your head for a few weeks and with the production by The Runners it’s a nice banger. They included the original “Ride” featuring Trey Songz, although it’s the weaker of the two they include. The verses on the original are weak and they seem to try to cater to the girls while the “Ride (Remix)” in addition features Juelz Santana & Rick Ross with new verses from Ace, which (in my opinion) are better than the original – and probably the strongest track on the CD.

Talking about strong tracks and an amazing banger of a production by The Runners is on “Can’t Stop” featuring Akon which could easily be called a “Street Anthem” or AKA something you would find on an DJ Khaled CD – another personal favorite song off Gutta.

In comparison to Plies “Who Hotter Than Me” or Lil’ Wayne‘s “A Milli” Ace Hood has his own street-anthem as “Get ‘Em Up” which has a nice sub banger  produced by Drumma Boy and a hot chorus “Aye Get ‘Em Up!” Another of which has a video, features Brisco on “Can’t See Yall” produced by Shawty Redd which is the better of the sub bangers.

Other tracks that standout would be “Guns High” featuring Konvict’s Rock City (R. City) and “Call Me” featuring Lloyd – both that have a good beat and production; lack the punch to make them some of your favorites.

Other songs featuring Plies on the J.U.S.T.I.C.E. League produced “Stressin’” and Dre on the Cool & Dre produced “Ghetto” and Trick Daddy with “Gutta“, the tracks are mediocre at best.

Overall a good debut album from Ace Hood, watch this guy in the future.. as I think he’s really going to be the next big thing in the game. If not, maybe we can just get some more bangers for our cars!