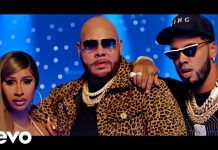 “One“ is the first single from rapper Fat Joe‘s upcoming studio album J.O.S.E. 2. The track is produced by The Inkrediblez and features Akon.

Jealous Ones Still Envy 2 (J.O.S.E. 2) is latino rapper Fat Joe’s ninth album, and is a sequel to his multi-platinum album J.O.S.E.. Is is scheduled for a release on April 7, according to Fat Joe’s MySpace. The album is to feature Lil Kim, Fabolous, Raekwon, T Pain, Akon, Kanye West, Lil Wayne, Ghostface Killah, Young Jeezy, OZ, and several others.