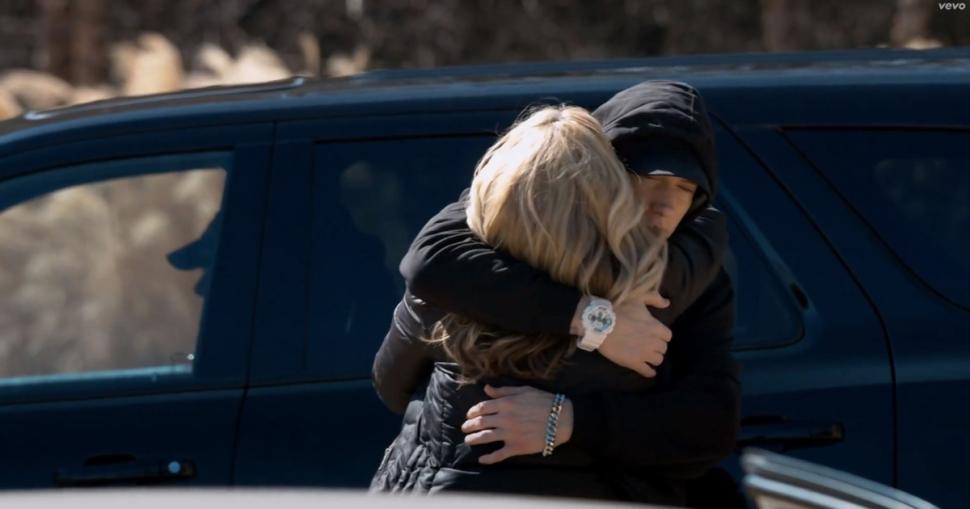 The music video was filmed in Detroit, Michigan on April 5, 2014, and directed by famed film director Spike Lee. It was released on May 11, 2014, Mother’s Day in the United States.

The video takes a chronological look at the turbulent times between Eminem and his mother.

The sound of the beat is very similar to “Mother” by John Lennon.

[Intro:Annotate Nate Ruess]
Mom, I know I let you down
And though you say the days are happy
Why is the power off and I’m fucked up and
Mom, I know he’s not around
But don’t you place the blame on me
As you pour yourself another drink, yeah

[Hook: Nate Ruess]
I guess, we are who we are
Headlights shining in the dark night I drive on
Maybe we took this too far

[Verse 1]
I went in headfirst, never thinking about who what I said hurt
In what verse, my mom probably got it the worst, the brunt of it
But as stubborn as we are, did I take it too far, “Cleaning Out My Closet”
And all them other songs, but regardless I don’t hate you
Cause ma, you’re still beautiful to me, cause you’re my mom
Though far be it for you to be too calm, our house was Vietnam
Desert Storm and both of us put together could form an atomic bomb
Equivalent to Chemical Warfare and forever we could drag this on and on
But, agree to disagree, that gift for me up under the Christmas tree
Don’t mean shit to me, you’re kicking me out? It’s 15 degrees and
It’s Christmas Eve, “Little prick, just leave,” ma, let me grab my fucking coat
Anything to have each other’s goats, why we always at each others throats
‘specially when dad, he fucked us both, we’re in the same fucking boat
You’d think that’d make us close, further away it drove us, but together
Headlights shine, and a car full of belongings
Still got a ways to go back to grandma’s house, it’s straight up the road
And I was the man of the house, the oldest, so my shoulders carried
The weight of the load, then Nate got taken away by the state at 8-years-old
And that’s when I realized you were sick and it wasn’t fixable or changeable
And to this day we remain estranged and I hate it though, but…

[Verse 2]
Cause to this day we remain estranged and I hate it though
Cause you ain’t even get to witness your grandbabies grow
But I’m sorry momma for “Cleaning Out My Closet,” at the time I was angry
Rightfully, maybe so, never meant that far to take it though
Cause, now I know it’s not your fault and I’m not making jokes
That song I’ll no longer play at shows and I cringe every time it’s on the radio
And I think of Nathan being placed in a home
And all the medicine you fed us and how I just wanted you to taste your own
But now the medication’s taking over
And your mental state’s deteriorating slow and I’m way too old to cry
The shit is painful though but ma, I forgive you, so does Nathan, yo
All you did, all you said, you did your best to raise us both
Foster care, that cross you bear, few may be as heavy as yours
But I love you, Debbie Mathers, oh, what a tangled web we have
Cause, one thing I never asked was where the fuck my deadbeat dad was
Fuck it, I guess he had trouble keeping up with every address
But I’d have flipped every mattress, every rock and desert cactus
Owned a collection of maps and followed my kids to the edge of the atlas
If someone ever moved ’em from me, that you could’ve bet your asses
If I had to come down the chimney dressed as Santa, kidnap ’em
And although one has only met their grandma, once you pulled up
In our drive one night, as we were leaving to get some hamburgers
Me, her and Nate, we introduced you, hugged you
And as you left I had this overwhelming sadness
Come over me as we pulled off to go our separate paths
And I saw your headlights as I looked back and
I’m mad I didn’t get the chance to thank you for being my mom and my dad
So mom, please accept this as a tribute I wrote this on the jet, I guess
I had to get this off my chest, I hope I get the chance to lay it ‘fore I’m dead
The stewardess said to fasten my seatbelt, I guess we’re crashing
So if I’m not dreaming, I hope you get this message
That I’ll always love you from afar cause you’re my momma

The fifteenth track on his eighth studio album The Marshall Mathers LP 2 (2013), it features production from Emile Haynie, Jeff Bhasker, and Eminem himself.

In this song, Eminem apologizes to his mother Debbie Mathers, the latter of whom Eminem has dissed numerous times in his earlier songs. It was released as the album’s fifth single on February 5, 2014. It has since peaked at number 45 on the Billboard Hot 100.