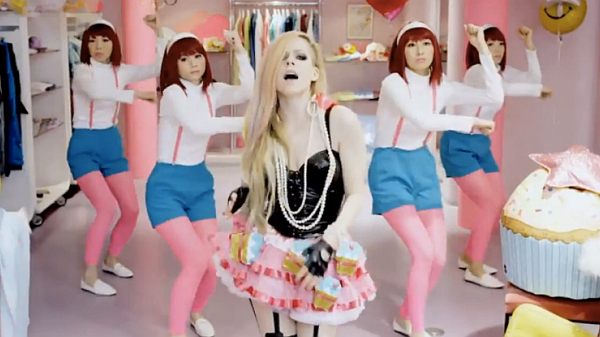 “Hello Kitty” is a song by Canadian singer-songwriter Avril Lavigne, released as a single on May 23, 2014, only in Japan from her self-titled fifth studio album Avril Lavigne (2013).

It was written by Lavigne, Chad Kroeger, David Hodges and Martin Johnson, while the song was produced by Kroeger and Hodges, with additional production by Brandon Paddock and Kyle Moorman.

Musically, “Hello Kitty” is a technopop song, featuring a dubstep-influenced drop. The song was influenced by her obsession with all things related to the Japanese brand Hello Kitty, also having sexual content.

The music video for “Hello Kitty” was filmed in Tokyo, Japan and premiered on Lavigne’s official website on April 21st 2014. It was removed from her YouTube channel,amid criticism that it was culturally insensitive and lacked energy. Although an official spokesperson stated that the song’s video was never officially released and was stated to go live that Wednesday, it was reuploaded to her official Vevo and Youtube channels on April 23rd.

[Verse 1]
Mom’s not home tonight
So we can roll around have a pillow fight
Like a major rager, OMFG (oh-oh, oh-oh)
Let’s all slumber party
Like a fat kid on a pack of Smarties
Someone chuck a cupcake at me
It’s time for spin the bottle
Not gonna talk about it tomorrow
Keep it just between you and me
Let’s play truth or dare now
We can roll around in our underwear how
Every silly kitty should be