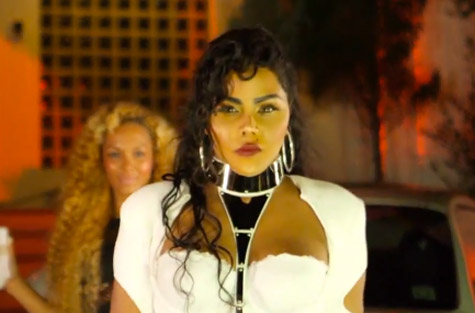 After dropping her mixtape single “Dead Gal Walking” on Halloween, Lil’ Kim rolls out the long-awaited visuals for “Looks Like Money,” which she previewed in July.

“The Queen Bee celebrates the good life while toasting in the backseat of a Maybach, and does the money dance in front of her exotic cars.

The clip is also comprised of footage of her on stage at Summer Jam, having dinner with Lil Mama and her protégée Tiffany Foxx, and riding through Brooklyn on the back of a bike.

Her mixtape Hard Core 2K13 was originally scheduled to arrive on Halloween, but has been delayed until Black Friday, Nov. 29.”

Watch Kimmy get money in the showy video. The music video premiered in early November 2013 via digital internet media outlets.