Jennifer Hudson – No One Gonna Love You Music Video 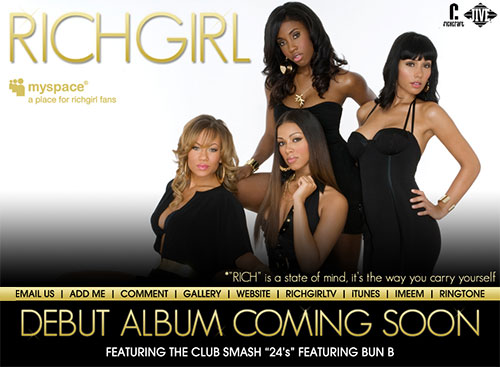 “24’s” is the first single and ‘club smash’ from upcoming R&B/Pop group Richgirl‘s debut album. The track features Bun B of group UGK.

Rich Harrison, known for his hit records “Crazy in Love” Beyonce, “Soldier“ Destiny Child,” “One Thing” Amerie, & many more is here to introduce the world to the new definition of a “Richgirl”. Richcraft Records, Rich Harrison’s label, presents a new era with his new four-member girl group: Richgirl. In this case the word “Rich” does not refer to material items, but rather a certain attitude and confidence, combined with individuality and talent that any girl might possess, each in their own way.

Do you think these girls got what it takes to be the next Danity Kane or Destiny’s Child? Check out more about them on MySpace.

Richgirl consists of four multi-talented young women, who reign from different parts of the country. All have different backgrounds and experiences, but each has the same passion and love for creativity, expression, music and entertainment which has brought them together. The members of RichGirl are as follows:

AUDRA
Hailing from San Diego, California, Audra has a sexiness that captivates the eyes of her fans coupled with quirkiness and unexpected wit. Aside from her sassy persona, her rich, syrupy vocals give the group its soothing element, which seals the all-star package.

BRAVE
This Baltimore native brings an edgy element to the group. She possesses sex appeal, uniquely combined with insightfulness, which is heard through her thoughtful spoken-word and street tinged raps.

LYNDRIETTE
The Southern Belle of the group, she was raised in North Carolina. She possesses exhilarating vocals that make her a singing powerhouse. She has a playful spirit and warmth that comes from her small town upbringing. At the same time she has a focus and hunger that will take her and Richgirl around the world.

SEVEN
Raised in Haines City, Florida, Seven will automatically be known for her dynamic vocals which she acquired from growing up in the church singing. She is the all-American girl, who happens to have a voice that would not be ignored.

Richgirl is currently in the studio recording their yet to be named DEBUT album.