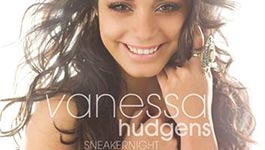 Sneakernight is the first single by American actress/singer Vanessa Hudgens from her upcoming second album Identified.

The music video of Sneakernight was released June 13, 2008.

It promotes Hudgens’ shoes, Red by Marc Ecko and shows Hudgens and some of her friends putting on sneakers with glowing shoe strings and dancing down the street and then attending a party and dancing.