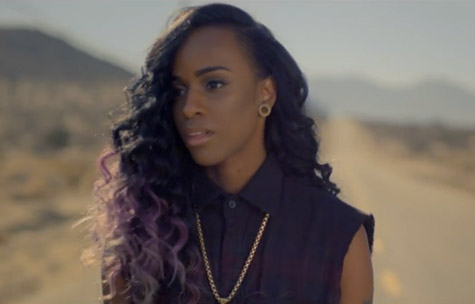 The song features Sia, and is the second promotional single released from the album. The music video premiered in mid February 2014.

[Verse 1: Angel Haze]
It seems like yesterday that I was nothing
Then all of a sudden I’m a volcanic eruption
Then all of a sudden it’s like spontaneous combustion
And I’m all up in your face, yelling
“Bitch, you can’t tell me nothing”
Cos I came from the bottom
Now everybody’s watching
I said it was my time
Now I’m who everybody’s clocking
And I’m just out here sprinting
I’m running right through my vision
I’m trying to outrun my past
But still trying to defeat my limits
Cause you only get one moment
In this life to be great
And you give it your all, despite what it takes
And you never let ’em kill you
You take take everything they give you
And throw it right fucking at ’em
And tell ’em it doesn’t build you
And no it don’t ever break you
And no it can’t overtake you
Life’s like a bed of roses
You take the thorns and you make do
Sometimes you have to hurt
For the cause to be reached
But one day you’ll be stronger
Than all that you beat, and you can say

[Verse 2: Angel Haze]
I woke up one Sunday morning, stopped believing in Jesus
Stopped believing in churches, I stopped believing in preachers
I realized I was a teacher, not just one of the heathens
I’m going to destroy the fallacies, start creating believers
Start creating the leaders, tell them who should they follow
Nobody but themselves, especially if they hollow
Especially when they empty, and death reserved for fulfillment
You the only person alive that holds the key to your healing
So you take it and you run with it
And keep going even when your sun’s hidden
Because the time we spend in darkness when the rain come
Is where we often find the light soon as the pain’s done
There ain’t no material things in the world
That can change the fact you feel alone
Despite the fact that it gets hard, you take it all and you still go
Take the sun and you still grow, lose your light and you still glow
I been there, I’m still here, and I know how you feel, so

[Verse 3: Angel Haze]
It’s hard to explain my way of living to people who never lived it
A minute in my position filled with my opposition
To anybody not different fighting to stay the same
I got lives in my hands and I’m fighting to make ’em change
Couldn’t accept responsibility, find somebody to blame
The emotions that I’m harboring ’bout to drive me insane
Tried to say “Fuck everything,” but I ain’t have the heart to
Rarely had the heart to do a lot of things I ought to
So now I spit it for people who say their cords missing
Inspire life into anybody that’s forfeiting
Cause it’s easy to keep pretending that there’s nothing wrong
But it’s harder to keep their head up and be fucking strong
So, now they telling me “Go, Haze, they can’t stop you
Heavyweight flow, if they can’t lift you then they can’t drop you
The pinnacle, if they can’t reach you, then they can’t top you
Man, they can’t do anything, that you’re about to”