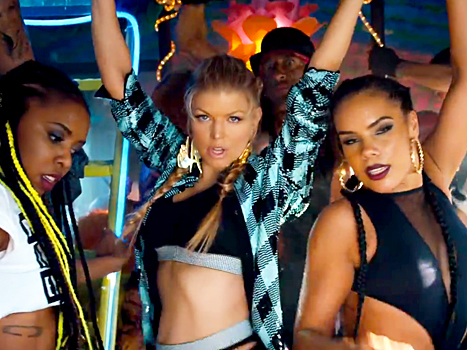 The track debuted on September 29, 2014 and the next day on September 30 to contemporary hit radio by Interscope Records. The track was released in early October, with an official Lyric Video following a week later on Fergie’s official YouTube VEVO channel.

The music video was released in early November 2014, and it features an added verse by rapper Y.G. The music video, directed by Rich Lee, was filmed on Saturday October 18th.

[Verse 1:]
Uh, tell ‘em where I’m from
Finger on the pump make the sixth straight jump from SoCal
Hollywood to the slums
Chronic smoke get burnt by the California sun
On the west side east coast where you at
Just got to New York like a gnat on a jet
To London, to Brazil, to Quebec
Like the whole damn world took effect to Ferg
Tell ‘em

[Verse 2:]
Uh tell em where I’m at
From the plaques to the uh uh
Everything fat
Got Mustard on a track
My girls all stack
When I roll down the window, let me know where you’re
Atlanta, North South kick it ‘lac
Texas grill, Cadillacs through Miami then back
To London, Jamaica then France
The whole damn world took effect to Ferg, tell ‘em

[Verse 3: YG]
W-E-S-T S-I-DE
Where you from? I’m from west side California baby
Brought her and fucked in our back yard, the [?] it ain’t hard
My mama be like “YG you so brazy”
Have you ever seen a gangsta nigga make a billion dollars?
Dre did it, he from L.A so pop yo collar
The LAPD be all over me
Tryin’ to ban me from my own bity
But for no reason the cops just killed that
Home [?] this shit been wild
I hit the club and party like I scored a touchdown
I pop a bottle and all the models wanna fuck now
We jammin’ on Pico, bustin’ hoes on Sunset
I could take you to Venice Beach and watch the sun set
Or I could take you to the Blippers game, floor seats, courtside
Eatin’ on Roscoe’s chicken wings