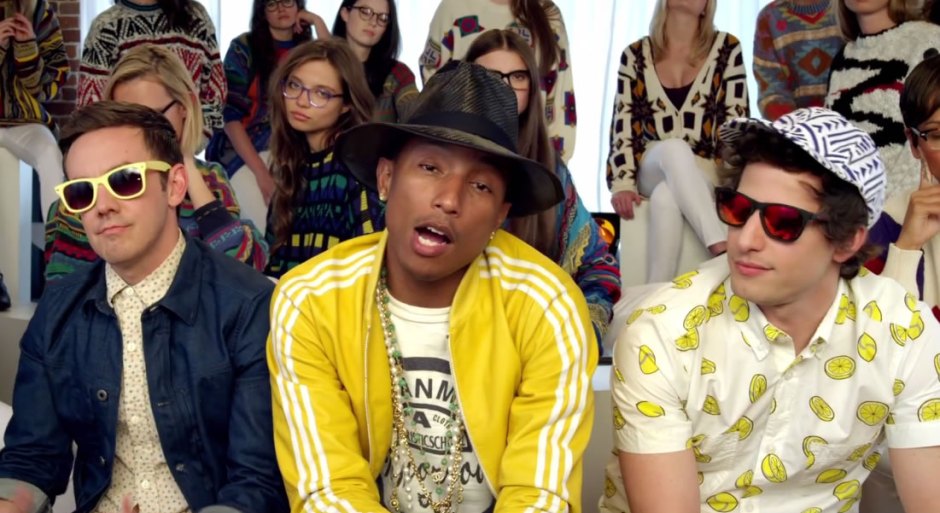 Since Andy Samberg hosted tonight’s SNL finale, it was inevitable that the Lonely Island made an appearance with a brand-new music video. This time, Samberg, Akiva Schaffer, and Jorma Taccone were joined by Pharrell Williams (Mr. #HAPPY) for a ditty explaining to all the ladies that a hug is not a sign of a committed relationship.

[The Lonely Island (TLI):]
WE. ARE NOT. GENTLEMEN.
Yo – I’ll hug a girl like it don’t mean nothin’
Then turn around and start huggin’ cousin.
I don’t love ’em, end of the fuckin’ discussion
Got ’em tucked between my wings like Thanksgiving stuffing.

She wanna hug from behind – I did it.
Then her friend jump in; I’m with’ it.
I hug ’em tighter than a tube top;
After that, it’s just a matter of time
Before the other shoe drop.

I get more hugs than Oprah selling drugs,
And the drug was pure X – no!, Mary Jo Sex.
Just hugs.

[Hook: Pharrell Williams]
Don’t get mad, girl. We get mad girls,
And we’re hugging all over the world.
So don’t catch feelings, it ain’t love.
We’re just the kings of giving out hugs.
And if you wanna settle down, you know you got us all wrong,
So we move to the next one, no disrespect, hon
But you can’t hug a rolling stone.

[TLI:]
You can’t hug a rolling stone cause it’ll crush you.
Begging me to hug you again? That’s when I shush you.
On an airplane, at a Knick game,
Feel the same damn thing when I hug them,
Which is nothing.
Can’t trust them, lose all respect when I hug them.

Now guess who’s back in the motherfucking house
With a fat hug for your sweater and your blouse.
Hugged so many ladies, arms shaky and shit,
Because I’m the Wilt Chamberlain of the upper-body grip.

Cause I get more hugs than a batch of puppy pugs,
Sitting on a fluffy rug, getting tickled touched and rubbed.
(OH SHIT!)
Real talk, like you chatting with a fisherman.
Wrap these chicks up like a motherfucking swisher, man.

[Pharrell:]
This ain’t love girl, because this hug world
Is just a big Game of Thrones.
We be king of the castle, got arms like a lasso.
But you can’t hug a rolling stone.

I been hugging on your mama,
Especially when your daddy’s gone,
Wearing his pajamas,
I know you thinking that is wrong.
I don’t care what some does,
I’m concentrating on her back.
I just wanna hug your mama in her Subaru hatchback.
Put her in a figure-4, yes I’m a hug gigolo.
Now she tells her tupperware friends to let their sisters know…

[TLI:]
… that I give more hugs than Atlas had shrugs
(Brush my head on her shoulder)
While your man mean mugs

[Pharrell:]
We had fun, girl. But don’t get swung, girl
Just because I hugged you raw.
We can do a group thing, bring Sarah and Suan
And we can have a hug-a-trois.
So quit trying to own my hugs
I gave you these arms on loan
So come give me a hug,
The waistline and above.
When push comes to shove,
You can’t hug a rolling stone.