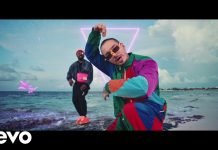 “I Gotta Feeling“ is the second official single from Black Eyed Peas‘ upcoming studio album The E.N.D. The song was first debuted on May 21, 2009. The track is a hot banger and an overall great second “Summer” single from the Black Eyed Peas. It’s what you’d expect it to be with a hot chorus and bassline that’ll have you singing over and over.

The song samples the song “Love Is Gone” by David Guetta. The song was mixed by Dylan “3-D” Dresdow. It was mastered by Chris Bellman at Bernie Grundman Mastering.